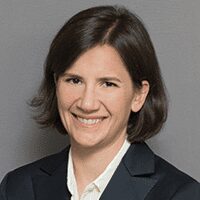 Ana C. Reyes Co-Chairs Williams & Connolly’s International Litigation practice group and is a member of its Executive Committee.  She focuses her practice on complex litigation and international arbitration.  She has handled matters for foreign governments, foreign officials, multi-national corporations, and international organizations.  Most recently, she successfully defended a former president of a foreign country in a three-week jury trial.  It was the first time a former president has been tried before a jury in the United States.  Ana has focused her pro bono efforts on representing individuals who seek asylum.  The Center for Gender & Refugee Studies has written, “Ana represents the very best of the legal profession: an accomplished and skilled litigator who provides the same high quality zealous advocacy whether she is representing an international corporation, a foreign government, or a refugee child.”