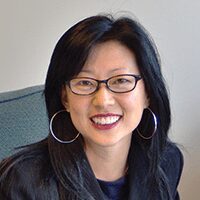 Prior to law school, Park and her sister operated and managed a successful restaurant in downtown Philadelphia.

In 2005, Park was named one of Pennsylvania’s “Fast Track” lawyers and was recently appointed to the editorial board of the Legal Intelligencer, the oldest law journal in the United States. She is currently serving her second term on the Pennsylvania Appellate Court Procedural Rules Committee and her second term on the Pennsylvania House of Delegates, the Pennsylvania Bar Association’s primary policy-making authority. Park is also an associate editor of the Philadelphia Bar Reporter, the monthly publication of the Philadelphia Bar Association. In 2001, Park served as president of the Asian American Bar Association of the Delaware Valley, which serves a wide network of Asian Pacific American attorneys practicing in Philadelphia, Delaware, and Southern New Jersey.

Park earned her bachelor of arts degree from Brown University, and her juris doctorate from Temple University School of Law.