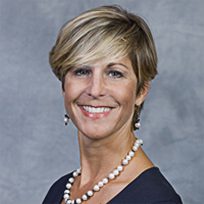 Robin Sangston is Vice President, CIPP/US Chief Compliance and Privacy Officer for Cox Communications, Inc. She leads the company’s Ethics and Compliance organization, which is responsible for the company’s Ethics and Doing Business Right compliance program. In addition, she has responsibility for privacy, antitrust compliance and employment law. In 2015, Cox was a recipient of a MARCOM award – Platinum Winner – for its Code of Conduct.

Robin is passionate about helping people succeed at Cox, in the legal profession and in the community. She served as founding co-Chair of Cox’s Women’s Employee Resource Group, which has over 1,100 members, and is the Executive Sponsor of Cox Enterprises’ 25 year-long mentoring relationship with Chamblee High School in Atlanta, Georgia. In addition, she currently serves on the board of the Minority Corporate Counsel Association. She is also board President of Jerusalem House, Atlanta’s oldest and largest provider of free and subsidized housing and wrap around services to HIV/ AIDS infected individuals and their families.

Robin has also served on numerous boards that promote diversity, inclusion and equality for everyone, including Women in Cable Telecommunications (WICT), Cable Positive, The Atlanta Legal Diversity Consortium, Page Turners Make Great Learners, the Atlanta Chapter of the Federal Bar Association, and the Boy Scouts of America, Atlanta Area Council, where she focused on the Scout Reach program to bring scouting to underprivileged youth in Atlanta.

Robin is a graduate of the Class of 2014 of Leadership Atlanta.

She has been recognized nationally and locally for her leadership and efforts to advance others by various organizations, including WICT, the Atlanta Business Chronicle and the Association of Corporate Counsel, Atlanta Chapter, Counsel on Call, OnBoard, Womenetics, and the Atlanta Chapter of the Anti-Defamation League.