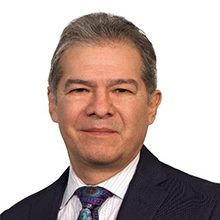 From December 2012 to December 2017, Anzaldua served as General Counsel and as Special Advisor to the CEO of MetLife. In that role he led the 1,000+ person team comprising the company’s global legal operations, corporate secretary’s office, corporate ethics and compliance group and government affairs operation. He designed and led the execution of the Company’s one-of-a-kind successful legal challenge of its too-big-to-fail designation under the Dodd-Frank Act.

Anzaldua joined MetLife from The Hartford Financial Services Group, where he was Senior Vice President and Associate General Counsel. There, he led the Company’s efforts to qualify for TARP funding and to raise more than $10 billion of capital in the throes and the aftermath of the Great Recession. After the financial crisis, he led the legal teams advising the Company’s two largest operating divisions, Commercial and Consumer Markets. Prior to joining The Hartford, Anzaldua was a partner with Cleary, Gottlieb, Steen & Hamilton LLP in New York. He began his legal career with the firm upon graduation from Harvard Law School in 1990.

Before law school, Anzaldua was the publications director and senior editor at the Center for U.S.-Mexican Studies, a University of California think tank focusing on research relating to Mexico and U.S.-Mexican relations, as well as Latin America more generally.

Anzaldua currently serves as Chairman of the Board of Trustees of the International Institute of Rural Reconstruction, an international nonprofit focused on economic and community development and empowerment in the developing world, as well as on the Boards of MCCA, the New York City Bar Fund, and LatinoJustice/PRLDEF. From 2007-2018, he served on the Board of the Greater Hartford Legal Aid foundation (and as its President from 2015-2018).