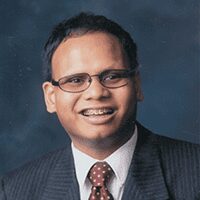 Olegario “Ollie” D. Cantos VII was recently named general counsel and director of programs of the American Association of People with Disabilities

In this capacity, Mr. Cantos will be responsible for National Disability Mentoring Day (NDMD), which was commemorated on October 16, 2002.

He was the recipient of the 2001 Paul G. Hearne/AAPD Leadership Award and has also won numerous awards for his leadership and legal expertise.

Mr. Cantos has had a distinguished career since graduating from Loyola Law School in 1997. He was the first blind person ever to serve on the board of directors of the Blind Children’s Center, as well as the youngest member of the standing committee on the delivery of legal services of the State Bar of California.

Active in many civic organizations, Mr. Cantos was selected to the state board of the National Federation of the Blind, and elected to the board of directors of the Legal Aid Foundation of Los Angeles (LAFLA), subsequently becoming its vice president.

Mr. Cantos also serves on the boards of the Westside Center for Independent Living, the Foundation for the Advancement of People with Disabilities, Loyola Marymount University National Alumni Association, and the Loyola Law School Alumni Association.