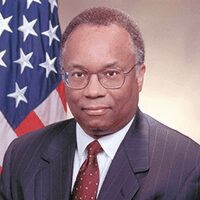 Larry D. Thompson has been named senior vice president and general counsel for PepsiCo, succeeding David R. Andrews, who will retire in February. Thompson will have responsibility for PepsiCo’s worldwide legal function, as well as its government affairs organization and the company’s charitable foundation.

Prior to joining PepsiCo, Thompson was a senior fellow at the Brookings Institution in Washington, D.C. He is also a member of the board of directors for Delta Airlines.