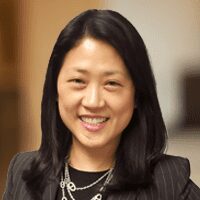 Jean Lee is the President and Chief Executive Officer of the Minority Corporate Counsel Association (MCCA), the preeminent advisor on diversity, equity, and inclusion to C-suites across corporate America. As an immigrant woman of color with a background in social work and corporate law, the professional has always been personal for Ms. Lee. A fierce advocate for her individual and institutional clients, she now champions systems-level change to create greater opportunities for those who, like her, are building careers in defiance of the status quo.

Ms. Lee brings an intersectional focus to her leadership of MCCA, where she has established a researched-based management consulting practice to help organizations develop sustainable diversity, equity and inclusion (DEI) strategies; identified and promoted more than a dozen high potential talent for executive level positions in the c-suite; benchmarked the first-ever inclusion survey, which has been used as a framework for creating an inclusive culture; and established the first-ever comprehensive law firm diversity scorecard card measuring quantitative and qualitative data.  She leverages her years of experience as a clinical social worker addressing some of the most complicated societal issues and as a litigator to serve as a solutions-oriented advisor focused on impact. As a result, MCCA is moving from being a thoughtful convener of people and ideas to a thought-leader and advisor on DEI issues in the workplace.

Prior to joining MCCA, Ms. Lee served as Vice President and Assistant General Counsel at JP Morgan Chase & Co., where she worked on consumer litigation and regulatory matters, and was influential in re-establishing the diversity and inclusion committee to increase representation; and as a litigator at Milberg LLP, where she served on the firmwide global diversity committee to increase engagement of diverse communities. She is a past President of the Asian American Bar Association of New York and a longtime active member of the National Asian Pacific American Bar Association and ASCEND, the leading association of AAPI executives. She currently she serves on the Select Committee for the Legends in Law Award for the Burton Foundation and as an advisor to law firms and corporate legal departments.

Ms. Lee is a sought-after conference speaker and a frequent commentator on diversity in the workplace and beyond. She has been recognized by numerous leading organizations as a change agent. The Council of Urban Professionals named her a 2014 Catalyst: Change Agent, and in 2015, she was recognized as a Trailblazer by the Korean American Lawyers Association of Greater New York. Follow Ms. Lee on Twitter and LinkedIn.

Ms. Lee holds a B.A. in Politics and Psychology and a M.S.W. in Social Work from New York University. She received her J.D. from Rutgers University School of Law, where she was a Senior Editor of the Rutgers Law Record. She began her legal career at the Port Authority of New York and New Jersey after clerking for the Honorable John J. Hughes, United States Magistrate Judge (retired), in the District of New Jersey. Prior to law school, Ms. Lee was a social worker for the Legal Aid Society in New York.