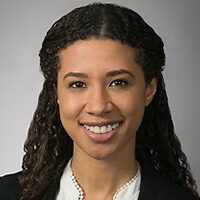 Danielle Thompson is a Labor and Employment associate at Sheppard, Mullin, Richter & Hampton, in the firm’s San Francisco office. Danielle started in Sheppard Mullin’s New York office as a summer associate in 2015 and remained there until April 2020, when she transferred to the firm’s San Francisco office. Her practice focuses on employment discrimination and wage and hour litigation, as well as advice and counsel regarding various topics including hiring, discipline, employee complaints, and terminations. She also advises clients regarding employment policies, handbooks, and agreements. In her practice, Danielle also routinely conducts workplace trainings and internal investigations for her clients. Danielle is currently admitted in New York and plans to take the California bar in October 2020.

Danielle is active in her firm’s affinity groups, particularly the firm’s attorney’s of color network. She also co-leads the firm’s Black Associates sub-group. She has helped to plan two of the firm’s last three diversity and inclusion retreats. In 2018, Danielle also organized a firm-wide CLE on Intersectionality, hosted by UC Berkeley Law professor, Russell Robinson, who guest lectured in Danielle’s Intersectionality seminar at Columbia Law, which was taught by Kimberlé Crenshaw.

Danielle attended law school at Columbia Law, where she served on the Columbia Journal of Race & Law as both a 2L staff editor and, as a 3L, the Journal’s Notes Editor. Danielle published her student note, “Midwives and Pregnant Women of Color: Why we Need to Understand Intersectional Changes in Midwifery to Reclaim Home Birth”, in the Columbia Journal of Race & Law in 2016. Danielle was also a member of Columbia’s BLSA, Empowering Women of Color (EWOC), and OUTlaws groups. Danielle also served as a 1L mentor at Columbia during her 2L and 3L years. Danielle graduated from Columbia in May 2016. Danielle received her bachelor’s degree in 2012 from UC Santa Barbara, where she studied Political Science and Philosophy, with an emphasis in Political Theory. She was born and raised in Berkeley, California, where she currently resides with her husband, 18 month-old daughter, and five year- old dog. Danielle is of Jamaican descent. Her mother was born in the parish of St. Elizabeth on Jamaica’s west coast and immigrated to England in the early 1960s. Both Danielle and her mother are dual citizen of the United States and the United Kingdom.

Danielle is also a trained birth doula and childbirth educator and spends a portion of her free time providing her services and support, as well as evidence-based resources, to expecting and new parents. Danielle is passionate about birth justice and black maternal health. Danielle other interests include hot yoga, sci-fi and fantasy novels, television, and movies, baking, and crocheting.

Danielle hopes to hone her leadership and team building skills in the Sources of Success Program to better her ability to lead and thrive both in her employment practice as well as in her firm’s affinity groups. She also hopes to form strong connections with other Program members and use the skills she learns to further her efforts in birth justice and hopefully begin performing pro bono work in that area to bring her career and personal passions together in a meaningful and constructive way.