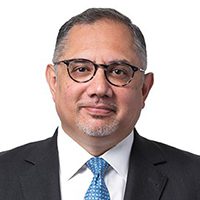 Arif Hyder Ali co-chairs Dechert’s International Arbitration Group. For over 30 years, Arif has served as lead trial counsel and arbitrator in investor-state, commercial and construction arbitrations under all major international arbitral rule regimes and pursuant to numerous bilateral and multilateral investment protection treaties. He has represented parties from over 50 countries in high stakes arbitrations under the laws of an equal number of jurisdictions, as well as international law. He has been decorated by the King of Bahrain with the Order of Bahrain for helping to resolve a border dispute with Qatar before the International Court of Justice and named a Law360 MVP for International Arbitration. Repeatedly recognized by ranking directories for his advocacy and strategic advice in cross-border disputes, Arif has won the International Law Office’s client choice award several times. He has also held senior positions with a specialized organ of the UN Security Council established to address war reparations, and with the World Intellectual Property Organization. He is lead author of the widely used treatise, The International Arbitration Rulebook.

Arif’s family was forced to flee East Pakistan during the 1971 Bangladesh Liberation War, and proceeded to live in countries as far flung as Brunei, Malaysia, Egypt, Libya and the Netherlands. After attending boarding school in London, Arif eventually graduated summa cum laude from Columbia University, and received his law degree from NYU. Arif’s multi-faceted upbringing gifted him with a command of several languages—and an unusual sensitivity to the dignity of all people. In a field in which an understanding of the cultural, political, and linguistic complexities surrounding a case often matter as much as legal skills and experience, Arif is firmly committed to fielding diverse teams as a matter of principle and case strategy.

Arif has a lengthy list of successes as lead counsel, especially for multinationals in the energy, oil and gas and mining industries in arbitrations across the globe. For example, he recently successfully defended a Hungarian oil and gas company in a geopolitically sensitive dispute under the Energy Charter Treaty over a multi-billion-dollar project in Croatia, and involving charges of bribery at the highest level. He has also successfully represented States such as Egypt, the Philippines and the Czech Republic in disputes alleging illegal State action; a hospitality multinational in multiple arbitrations over some of its most iconic properties; and various entities in arbitrations against ICANN, the Internet’s de facto regulator.

Arif’s belief in the power of diversity also infuses his pro bono work. He has represented asylum seekers and falsely imprisoned journalists before UN and human rights bodies, reported on violence against women and Rohingya Muslims for the ABA, litigated for an NGO seeking Internet access rights in Africa, and represented a coalition of LGBTQIA organizations to secure rights to the .GAY Internet top-level domain.

Arif teaches international arbitration at several law faculties, has spoken at more than 150 conferences worldwide, and publishes frequently, including most recently in the Wall Street Journal in favor of slavery reparations.