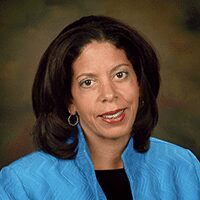 At Sears, Zopp had responsibility for legal affairs, public relations, government affairs and compliance. She joined Sears from Sara Lee Corporation where she served as vice president, deputy general counsel and managed senior attorneys at the operating divisions, risk management, and environmental services and safety. Zopp was a partner at the law firms Sonnenschein Nath & Rosenthal as well as McDermott, Will & Emery. She also served as the first assistant state’s attorney of Cook County and held various roles in the United States Attorney’s Office, Northern District of Illinois.

Currently, Zopp is a member of the board of directors of Andrew Corporation, where she serves on the compensation and nominating and governance committees. She is involved in national and local community and professional associations, including the National Urban League, American Bar Association, Chicago Bar Association, Black Women Lawyer’s Association, Leadership Greater Chicago, the Economic Club, the Heartland Alliance, and Chicago Area Project.

Zopp holds a bachelor’s degree in history and science as well as a juris doctorate, both from Harvard University.