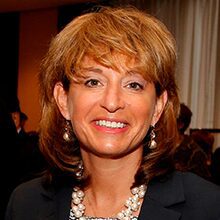 In 2010, Olli was named as a “Legends in Law” award recipient; this national award, given by Burton Awards in association with the Library of Congress, recognizes outstanding leaders in the legal community. In 2011, Diversity Journal named her as a “Woman Worth Watching” and in 2014, Legal Momentum honored her with its “Aiming High” award. In 2017, Olli received the “Transformative Leadership” award from Corporate Counsel in the category of Visionary Leadership. Most recently, Olli was chosen as one of the Silicon Valley Business Journal’s 100 Women of Influence for 2019.

Amy holds a Bachelor of Science degree in business administration from the State University of New York at Oswego and a Juris Doctor degree from Western New England School of Law.

She currently serves on the boards of the Minority Corporate Counsel Association (MCCA) and Televerde.