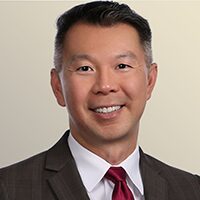 Albert Giang’s cutting-edge practice focuses on defending tech startups and public companies against consumer and employment class actions, regulatory enforcement, and complex litigation, and providing crisis management for disrupters who are navigating novel legal issues. With “an impressive track record for passionate advocacy on some of the most pressing legal issues—a pillar of influence in the technology, appellate and pro bono fields” according to the Los Angeles Business Journal, Albert serves as “go to” counsel for some of the most respected companies in the gig economy, e-commerce, telemedicine, and social media space. He also specializes in appellate litigation, having represented clients in cases in the United States Supreme Court, federal circuit courts, and California appellate courts.

Albert has been named a Minority Leader of Influence, Top California Labor & Employment Lawyer, and Best Under 40. He was recognized for one of the Top California Verdicts in 2020 and NAPABA’s Pro Bono Award in 2018, which cited his longstanding advocacy on behalf of immigrants, LGBTQ+ persons, and Asian Pacific Americans. Albert graduated with honors from Stanford Law School and clerked on the Ninth Circuit Court of Appeals.